So, I started off this year with a challenge to myself: make 12 games in a year; one per month.
The idea behind this was to keep myself motivated while throwing out a few projects on itch.io so that people could get to know me and what I'm capable of creating.
This was also meant to help me get a job at a "proper studio", by building up my portfolio while also gaining experience shipping games and working on parts of games that I otherwise wouldn't.
So all in all, this started incredibly well, and I'm really proud of the first 5 games I made. Problem is, I've had trouble delivering them lately, and that's basically because I have again lost the motivation to create a project from scratch each month in Unreal, work on it, then release it via itch.
It's actually a very tedious process which goes a bit like this:
As you can see, the "making the game" part is very tiny. A huge portion of it is "Unreal boilerplate" and a lot of it is getting the game presentable and ready for release. So that sucks. Plus, I recently did get that dream job in a "proper studio" (yay 😁!), which has taken a lot of my time and energy (boo 👎!).
So here's what I'm proposing. No more 1-game-per-month as it stands. Instead, I'll work on my long term project, slowly chipping away at it with the intention of releasing a demo in some number of month's time (nice and non-commital, right?). I'll also explore prototypes as I have been doing, but at my own pace and probably in other software packages (I've been playing with Godot recently - it seems pretty damn amazing!).
How's that sound?
On the more positive side, over the past 7 months I've levelled up my experience in the following technical skills:
But, perhaps more importantly, I've learned the following:
Not as cool as the first list, but will prove super useful when the time comes to ship my big game project and support it.
So for now, no more cool prototypes (unless they're made in Godot or Unity!), and no fixed timelines for them. However, I'll pour the new found time into working on my "real" project, which will hopefully see the light of day (or a demo) soon™.
- Joe - 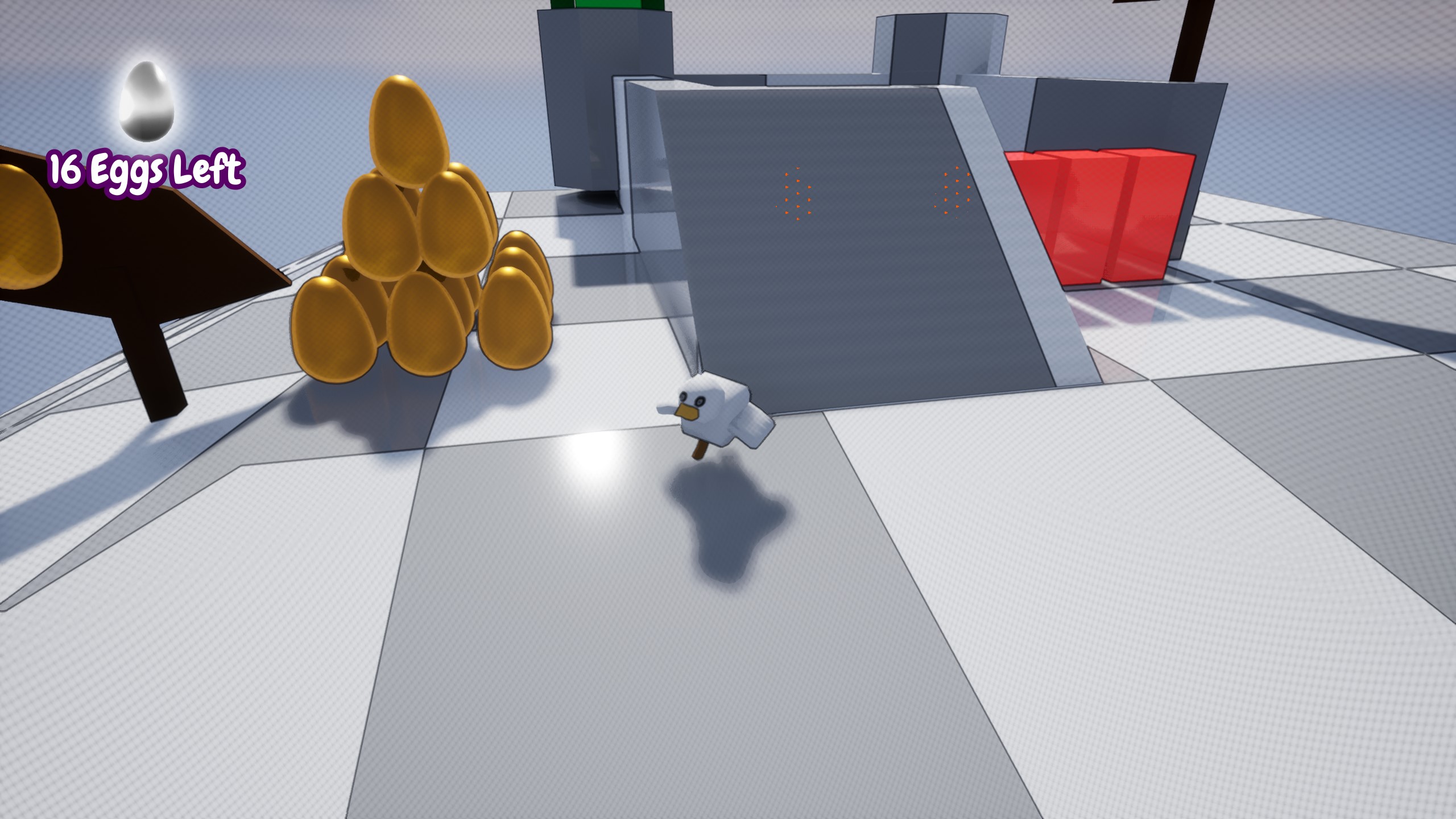 Okay - so I missed May entirely. Sorry about that, busy life and all that! I'll see if I can sneak in an extra game on one of the other months... let's see! Anyway, without further ado I present to you game #5 of 12 in my 12 month challenge - "Bok"!
So what's this Bok you ask? Bok is a game about a chicken who has had all of his Golden Eggs stolen by some Bad Guy, and must retrieve them by... uhh... yeeting them off the edge of each level. This is done by flapping, which incidentally is the only thing Bok is able to do. That and accidentally fall off levels, of course!
May and June's game was inspired by the desire to make a one-button game that was still somewhat compelling. I also wanted to take the opportunity to use "data tables" in a game to promote easier customisability, and I wanted to create every single asset in the game myself. That last bit didn't happen, as I soon realised I couldn't make music myself - at least without delaying the game further. Also some effects/shaders and such were 3rd party - the credits lays this out fairly clearly though, so head on over there if you want to see which parts I cheaped out on 😜!
Anyway, enough rambling - if you want to give it a spin, take a look at: https://tinygoose.itch.io/bok!
And if you feel nosey/adventurous/intrigued, the full source code is also available at: https://github.com/tinygooseuk/Bok. As usual, you won't be able to build and run the game from there as it's missing the project files and assets, but you can see how it was done!
- Joe - 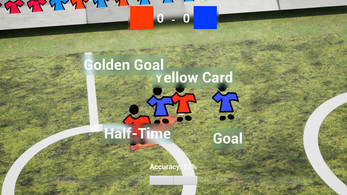 With just minutes left of April, I present to you game #4 of 12 in my 12 month challenge - "Verball Abuse"!
So what's Verball Abuse? Why two L's? Well, this is not a game about abuse at all, but rather it's a football game - but with a twist: the only input available to you is your keyboard - more specifically, you can only type football-themed words to influence your team's shots.
April's game was inspired by a game I saw at EGX Rezzed - an actual football game! This game is very much nothing like normal football and is more of a prototype.
Get it? Proto-type. Typing? No? Moving on...
So yeah, that's the game. I made it because I'd never had the interest in making a football game before and wanted to try making a sports game with a bit of a twist. In the process I levelled up my skills in the following:
Anyway, enough rambling - if you want to give it a spin, take a look at: https://tinygoose.itch.io/verball-abuse!
And if you feel nosey/adventurous/intrigued, the full source code is also available at: https://github.com/tinygooseuk/VerballAbuse. As usual, you won't be able to build and run the game from there as it's missing the project files and assets, but you can see how it was done!
- Joe - 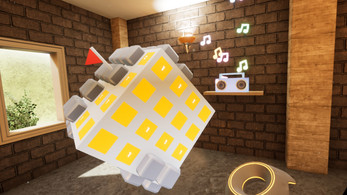 At long last, I present to you game #3 of 12 in my 12 month challenge - "Minesweeper VR"!
March's game was actually made throughout February and March 2019, so it's another slightly cheeky entry. However, I feel that the level of polish I've been able to apply to it justifies the time spent!
So what is it? Well surely you must remember the old "Minesweeper" computer game from Windows 95, right? No? Well, it's a very basic puzzle where you click around a grid trying to uncover mines without actually setting them off. Sounds simple, but it's really pretty tough! In my version of this classic game, the grid is mounted onto a cube, adding a 3rd dimension (3D 😱!) into the mix.
Anyway, enough rambling - if you want to give it a spin, take a look at: https://tinygoose.itch.io/minesweeper-vr!
And if you feel nosey/adventurous/intrigued, the full source code is also available at: https://github.com/tinygooseuk/Minesweeper-VR. As usual, you won't be able to build and run the game from there as it's missing the project files and assets, but you can see how it was done!
- Joe - 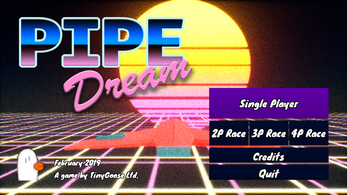 Two days ahead of schedule, I present to you game #2 of 12 in my 12 month challenge - "Pipe Dream"!
February's game was actually made in 2017 (and some of 2018) - it's a real oldie but it's been "kicking around" for a long time without ever having seen the light of day. And since I've been struggling to finish the "real" February game (it's another VR demo with some very complicated interactions 😬), this will hold the fort for another month. Expect to see more exciting stuff in March!
So what is it? Well, Pipe Dream is a simple Arcade-style spaceship-flying, obstacle-dodging racing game where you must pilot a spaceship from one end of a pipe to the other without crashing and burning (Arcade Mode), or challenge up to 3 other local players to a race against the clock (Race Mode).
Of note, this game features fully randomly generated pipes, which are created from a palette of a handful of crafted pipe sections. The procedural level generator is seed-based, so you can send your friends your favourite map seeds and challenge them to beat your highscores!
Anyway, enough rambling - if you want to give it a spin, take a look at: https://tinygoose.itch.io/pipe-dream!
And if you feel nosey/adventurous/intrigued, the full source code is also available at: https://github.com/tinygooseuk/PipeDream. As usual, you won't be able to build and run the game from there as it's missing the project files and assets, but you can see how it was done!
- Joe -
Older
©2016-2020 TinyGoose Ltd. All rights reserved.
TinyGoose Limited is a company registered in England & Wales with company number 10285773.